The client is the London branch of a major, Japanese Investment Bank.

The technology department was embarking upon a complete assessment and, where necessary, replacement or upgrade of its entire telecoms, hardware, operating software and applications software estate to eliminate the risks associated with the “millennium bug”.

Zeroarena was tasked with managing the implementation of all millennium software and middleware changes whilst maintaining service and ensuring the integrity of each change. We were further asked to manage a project to replace desktop PCs across the London Branch.

This activity is typically referred to as “Change Management” under Service Management good practice regimes such as ITIL.

Initially we undertook a planning process that entailed collating individual plans and incorporating third party activity. This was followed by several cycles of review and negotiation to ensure a coherent plan. A risk assessment exercise was carried out (see below). Once agreed, the plan was presented to both business and contributing groups to obtain their commitment to its success.

The PC replacement project centred around establishing a set of appropriate, predefined configurations (“images”), identifying the most suitable for each user and then scheduling roll-out of the replacements so that, on any given day only a proportion of the users in a department were impacted.

Assessment of the risks to the implementation plan identified uncontrolled and unrecorded changes to systems, particularly business applications, as a major risk. Historically the organisation was accustomed to having changes implemented on demand. After publicising the risk and gaining the approval of appropriate levels of management within the bank, we developed and published a set of change request and management processes for use across the branch. The processes had two main objectives:

The new change control process was actively promoted and ultimately accepted across a reluctant business. Obtaining the wholehearted commitment of the IT director proved essential in both gaining acceptance of, and enforcing, the new working practices. 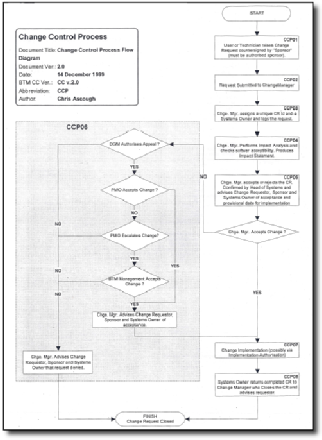